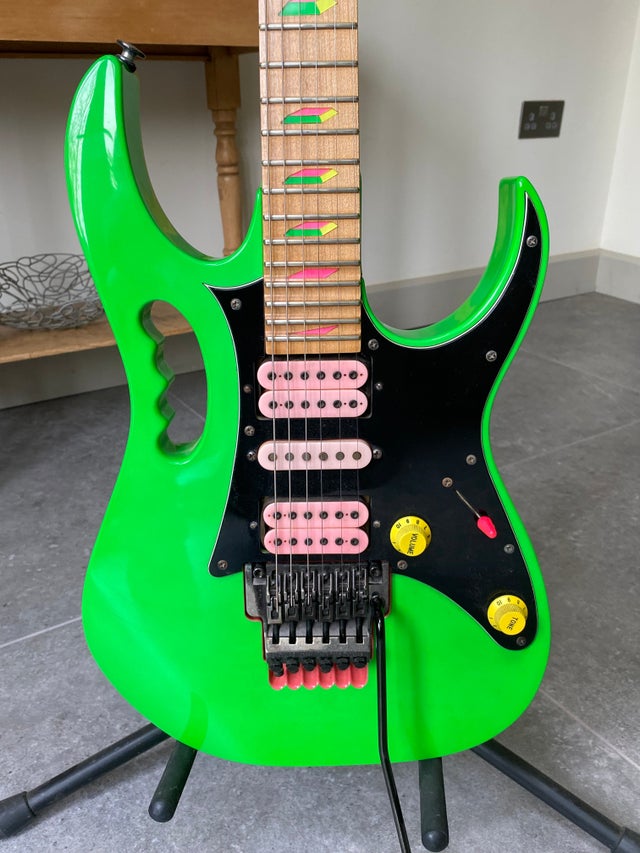 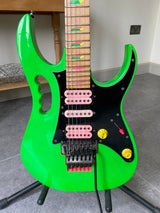 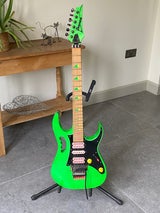 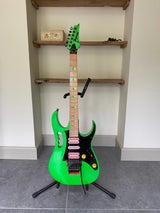 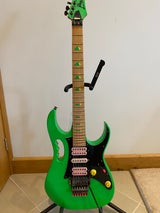 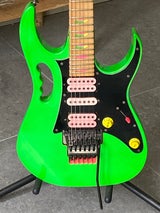 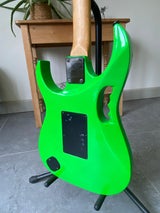 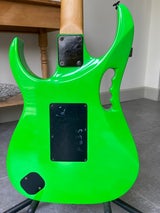 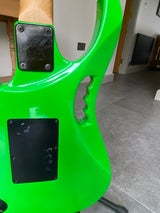 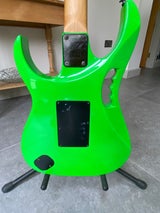 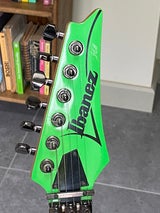 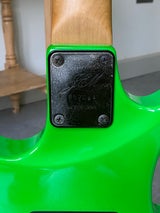 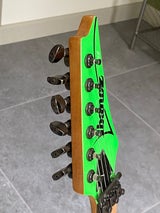 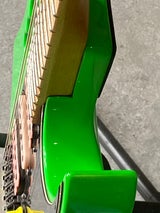 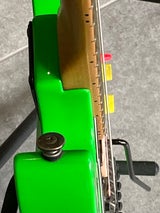 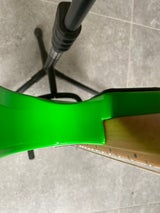 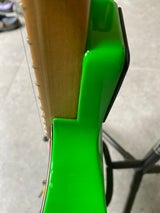 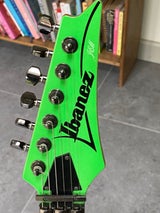 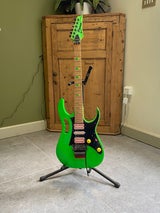 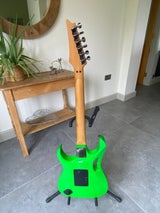 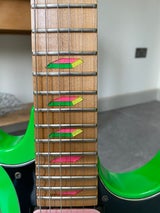 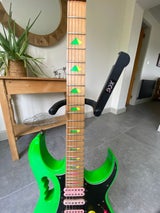 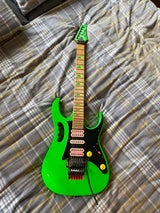 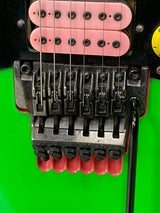 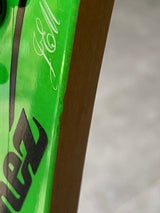 Very sorry to say, you missed out on this one. However you can sign up on our mailing list to ensure you dont miss out next time!

If you made it here, you're probably already drooling at the thought of this guitar. We were! We expect there to be significant interest in this particular guitar, and for good reason! Whilst we will endeavour to respond to all questions promptly and in the order we receive them please note that we operate a policy that asking price offers are honoured in the order received, ie on a first come basis. Offers under asking will be considered but we cannot guarantee they will be successful.

These opportunities come around once in a decade. In all our experience selling Ibanez Jems we have yet to comes across an LNG in such incredible shape, All original parts. Exceptional vivid colour, no significant chips or dings, NO neck pocket cracks, original period correct case. Just beautiful. Check out the full condition report below for a detailed description of the guitar and this incredible opportunity.

Deposit Required: Please contact before purchasing. A 15% fully refundable deposit is payable to Sell My Jem via PayPal on agreement of an offer. You will then complete the deal directly with our verified partner and meet another Jem fan like you! This deposit is held on account until you have receipt of the guitar. See our Consignment Buyers Guide ​

The beautiful Loch Ness green of the Ibanez jem LNG! The Ibanez JEM777 is the first JEM series guitar model and signature model for guitarist Steve Vai manufactured by Ibanez. It was revealed at the 1987 summer NAMM Show.

The 777LNG was the first produced of all 777 Jems and only 777 exist each of which was numbered and signed by Steve Vai himself. The numbers produced of the yellow and pink guitars are unknown, but for what it’s worth the pink was produced from 1987 up to 1987 and the yellow from 87 all the way up to 1996. The original 777 models featured a basswood body with a maple neck and fretboard and had an Edge tremolo and DiMarzio PAF Pro pickups. The inlays were also originally pyramids that gradually depleted as they went higher up on the neck.

These days the 777 line is among the most collectible guitars out there. Cherished by guitar players, collectors and now even investors as incredibly valuable icons of music. It’s pretty infrequent, but every so often you can catch them on EBay for a substantial price, and even more rare and proportionately more pricey you can find a Loch Ness Green JEM777. The pinnacle of the collectable 777's and one of the coolest investments a Jem enthusiast could make.

Video is for illustration only

Wow what an incredible moment the first time you see this guitar in the flesh. Truly special and a collectors dream right here!
The 777 Guitars are all incredibly rare, amazing and beautiful instruments. The LNG model stands head and shoulders above any other as the jewel in many collectors stash with the 777 as one of the most collectable guitars of the series. It is a huge privilege to offer this fantastic example of the legendary 777LNG (Loch Ness Green) manufactured with a limited run in 1987. Hand signed by Steve Vai  this particular LNG features hieroglyphs penned by the man himself, still intact, and the matching original grey lined hard case (Chesbro) and also including the much sought after original palm rest. The whole guitar has had no modifications/changes and is as it was in 1987!

The "88" Plate - The serial number for this guitar is indeed indicative of an 1988 year. The full serial is 882004. LNG's can have two serial numbers depending on when they were received by Vai and signed. both 87 and 88 serials exist on original LNG's. There is a handy website that has tried to catalogue the serials and pictures of original LNG's (this being one of them in the registry). A link has been provided here

Has the headstock been touched up? - The answer is no, this is not a touch up job. The close up of the headstock has been taken to show some small indentations caused by pressure and are around 1mm in diameter. This isn't where a touch up pen has been used but the original paint has ben indented but still intact.

Where is the signature/Why is the signature on the backplate - The signature and numbering by Vai is located on the backplate on the rear of the guitar and is original. Many LNG's were signed in person on the front of the guitar. However, there are also a large number that had to be sent to Vai for signing whilst on tour. Rather than sending the guitars, the back plates were sent to him for signing and you will see this feature on many of the later serial numbered LNG's. You will find a large percentage that feature the signature on the tremolo cover plate like this.

Has the guitar been refinished as it hasn't faded and looks too good- The condition of this LNG is its best selling point and particularly the bodywork. It has been very carefully looked after all of its life and cared for. A lack of fade is not evidence of a refinish, especially when looking at an LNG. Whilst other 777's had paint defects that caused degradation over time the LNG doesn't suffer from the same problem. The yellow (DY) would often orange over time due to exposure to sun. The SK would often fade from pink to a salmon or even white if left in the sun. In all our decades of experience selling Jems the LNG is yet to show signs of fading on the bodywork. The LNG quite simply doesn't suffer from these paint issues. As such, as is the case here the pickups may have faded slightly but the paint remains vibrant.

I hope the above answers questions you may have about the guitar but please do get in touch if you have any more as they are useful for prospective buyers.

Guitars History
Purchased 4 years ago from friend who had owned it for 8 years. Minimal playing time, kept in case for much of this time.

Fit & Finish
Swirl on pick-guard. 2 very small marks in neck pocket - not cracks. Small paint indentation on headstock highlighted on picture. Not through to the wood but it has
been marked very slightly here. Plays beautifully.

Fret Board/ Fret Life
The frets, fingerboard and neck are in fantastic condition with plenty of life in them, no real signs of wear. This guitar really hasn't seen much playtime is its life.

Tremolo
No issues - oxidised over 35 years. No paint issues on lions

Neck
Feel almost like new. no colour degredation or corrosion on the neck. Discolouration that plagues these maple boards are non existent here. No deviations, set up a couple of years ago by professional

Electronics
Everything works perfect. Amazing sound as you would expect on such high-end Jem from the golden era! Pink Dimarzios have faded over last 35 years so commensurate with their age and better than most I've seen.

Bodywork/Paint
Near mint condition, no significant marks/dents/chips with the exception of the highlighted mark on the headstock. A tiny indentation that hasn't chipped the paint but has marked ever so slightly this part of the headstock

Case
Not original but the period correct case, not the numbered pyramid serial case.

About Our Consignment Guitars
​

We are now have 2 types of guitar sales on our website.

Buying direct through us - These are guitars currently in our store which we have in our possession, handle all aspects of the sale and are based in the UK

Consignment sales like this one - These are guitars from verified partners, collectors and enthusiasts of jem guitars. This allows us to sell jems from areas we cannot import from but that may be more local to you than our UK base. Save yourself the import fees, customs and the environment by buying local.

Security and safety is our number one concern. All consignment sellers are vetted by SellMyJem, all guitars are checked for authenticity by us from the pictures provided and drawing on our years of experience working with Jems, we ensure that proof of ownership and verification of address have been provided before we allow any listing and try to mitigate and personally select all guitars before they ever make it to this page.

In the unlikely event there may be a dispute or problem you are completely protected, all deals are paid via PayPal and any disputes can be handled by their dispute/resolution process and all guitars still carry industry standard Buyer Protection on purchases

We take shipping guitars of this beauty very seriously and make sure that our consignment sellers honour our shipping policy. All guitars come with full insurance at the declared value of the guitar for damage/missing in transit. All parcels are tracked in accordance with PayPal protection guidelines and you will be issued a tracking number as soon as payment has been received and delivery arranged

All guitars are wrapped to the highest standard, inside the case the guitar will be bubble wrapped and any accessories individually packaged inside the case. Nothing loose will be left in the case. The guitar is then wrapped a total of 3 times in bubble wrap before a strong brown paper incases the the whole guitar. Card board boxes are sometimes used dependent on the case and size
​

As these guitars are not handled directly by Sell My Jem, guitars are sold as seen unless otherwise stated by the seller. You can of course always request set ups from the seller directly once we have received your deposit and connected you with the seller of this guitar.
​