After a nearly two-year CITES ban on the movement of rosewood crossing international borders, unless accompanied by the relevant paperwork, it looks like the ban has finally been overturned.

CITES vs. Rosewood: The turnaround
According to media reports, trading restrictions on rosewood have been revised by the relevant CITES committee allowing all ‘finished’ instruments with rosewood, all their parts and spares, to be traded freely. This ends the restrictions previously in place for musical instruments, which will now apply only to the movement of rosewood as a raw material across international borders.

Common Sense That makes sense to me. Why would you want to confiscate or destroy instruments legitimately built using rosewood, especially vintage ones or ones where the wood had been sourced in a way that is environmentally friendly? According to NPR, the 2017 restrictions cost the MI industry tens of millions of dollars without a big impact on rosewood conservation. That’s quite a big economic effect on the companies involved.

They got their wish Monday as a key CITES committee approved it. If finalized as expected this week, the exemption will allow finished musical instruments as well as parts and accessories containing rosewood to be transported freely around the world without permits.

Trade in raw-material rosewood would remain regulated and subject to permits granted by individual countries.

In a written statement to NPR, Lisa Handy, director of forest campaigns at the Environmental Investigation Agency, an advocacy group, called the exemption "a reluctant compromise for many rosewood source countries."

"We remain concerned this could set a bad precedent," Handy wrote. "It will be even more imperative that the sourcing and manufacturing processes are well-controlled to ensure that rosewood-producing countries, which are struggling to control illegal loggers and trafficking ... receive the international support they need to implement the convention."
.

​UPDATE: Sell My Jem Can Now Ship WORLDWIDE! 2017: CITES Application Service for any guitar shipped from the UK 2017:

We now offer a CITES application service for ANYONE wishing to sell a guitar from the UK to anywhere in the world.  A start to finish service and you will receive your permit in the post. Our service fee is £109 and includes:
CONTACT US
If you are interested in using our CITES service or have questions just get in touch, click the button

Whether your selling/buying a guitar through us or hoping to sell you guitar to someone in the future overseas. you need to know about this!

​The information below will be updated on a constant basis and applies to anyone wishing to sell or buy a guitar to us or privately.

As it stand, our understanding for EU and UK customers is that this will not affect your ability to sell or buy a guitar through us, you will not need to apply for a permit if sending a guitar within the EU borders.

For USA/CANADA/AUSTRALIA/REST OF WORLD customers selling through us, we will be able to guide you through the process of obtaining a permit to sell your guitar. Dont risk sending your guitar internationally to a buyer and risk having customs enforce penalties or turn your guitar back, they are within there rights to destroy the guitar! All you will need is the addition of a permit when selling or purchasing a guitar through our store or home page and we will help you every step of the way to make your sale or purchase as easy and care free as possible. You can also sell your guitar via Consignment selling service!

Industry leaders in the US, UK and around the world are starting a discussion to lighten the rules on the smaller quantities you will find in fretboards. While there is no guarantee that this will happen this is a conversation that is happening.

We’ll start to see manufacturers using less and less Rosewood until this can be resolved. Brands like Chapman and Dowina have already started changing their models to use Ebony boards instead of Rosewood.

Because of the cost of Ebony however we are sure to see more companies using man made materials like Gibson’s Richlite or other alternatives like Baked Maple.

FOR USA/WORLD CUSTOMERS AT SELL MY JEM 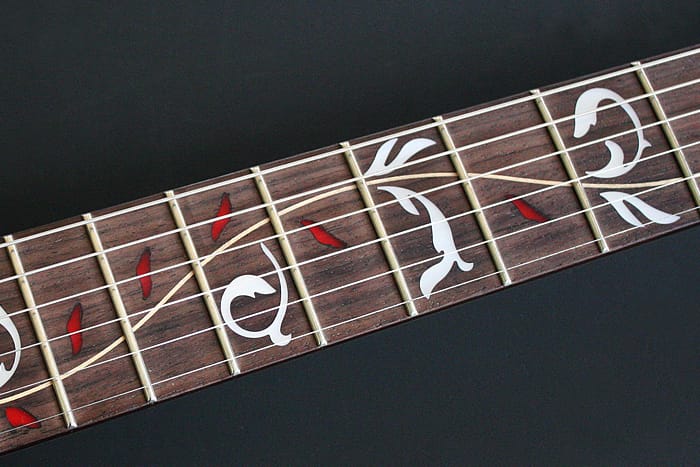 If your selling, importing or exporting a guitar with Rosewood/Bubinga
​

​A new regulation takes effect on January 2, 2017 that calls for documentation when shipping instruments internationally that contain any amount of any kind of rosewood or certain types of bubinga. It does not apply to instruments shipped within the borders of your country or instruments carried for personal use while traveling internationally [unless they contain more than 22 lbs. (10 kg) of the regulated woods].
This is a developing story, with details emerging as government agencies figure out how to create processes around the new requirements. To what degree they are enforced remains to be seen.

How Can Sell My Jem Help?

​Service 1 - CITES Applications
We now offer a service for UK customers selling any guitar abroad, ensuring that the application and permit for CITES is completed and our turn around time is faster than anywhere else in the UK. Just contact us if you would like us to handle your CITES permit and open your guitar up to a world of potential buyers.

Service 2 - Sell Directly To Us
If you have been having problems selling your jem or are finding it difficult to sell due to these new restrictions then you could consider selling through Sell MY Jem as we take care of the process for you on your behalf. Dont want to sell to us?

Service 3 - Sell On Consignment
We also offer a consignment service. Dispite the disruption that these new rules will no doubt reap, we will guide you through the process and factor in any permit costs into our offers for your jem so you dont have a thing to worry about! Come and have your guitar valued by visiting the Sell My Jem Homepage

Here’s what we know so far.

The New Regulation on Rosewood and BubingaThe Convention of International Trade of Endangered Species of Flora and Fauna (CITES) held a conference from September 24 - October 4 this year in Johannesburg, South Africa where it was decided that all species of rosewood under the genus Dalbergia and three bubinga species (Guibourtia demeusei, Guibourtia pellegriniana, and Guibourtia tessmannii) will be protected under CITES Appendix II.

Kosso - sometimes called African rosewood (Pterocarpus erinaceus) - will also be protected.
While Brazilian Rosewood is currently under CITES protection (those laws will stay in place), this move places all the other nearly 300 species of rosewood under similar regulation.

This includes the East Indian rosewood and Honduran rosewood - as well as woods like cocobolo (Dalbergia retusa) and African blackwood (Dalbergia melanoxylon) - that are widely used in the manufacturing of stringed instruments, marimbas and some woodwinds.

What This Means For manufacturers
When importing any species of Dalbergia or the other woods mentioned, there must be an accompanying CITES certificate from the country it came from if it arrives after January 2, 2017.
Manufacturers who currently have stockpiles of the newly regulated wood must document their inventory and apply for pre-convention certificates.

For dealers and sellers

When shipping musical instruments that include any amount (i.e. fingerboard, back, sides, binding) of Dalbergia or the other newly regulated woods out of your country as part of a commercial transaction, each one must be accompanied by a CITES re-export certificate.

Even if the instrument was made with Dalbergia or the other regulated woods that were acquired before January 2, 2017 - such as a used or vintage instrument - it still must be accompanied by a CITES certificate and marked pre-convention when shipping internationally.
For example, a seller in Nashville looking to ship her 2013 Martin 000-28 with East Indian rosewood back and sides to a buyer in Canada must apply for a re-export certificate, pay the application fee, receive the certificate, and include that document with the guitar when shipping.

For sellers in the United States, CITES re-export certificates must be applied for through the US Fish and Wildlife Service. You can download the application here.

Representatives of the agency have said that initial turnaround times on certificate application may be on the order of months.
For more information, you can contact their office at (703) 358-2104 or at managementauthority@fws.gov. You can read the official letter from US Fish and Wildlife here.

If you contact US Fish and Wildlife, please keep in mind that they did not suggest or create this regulation - the parties of the international CITES conference did. The employees of US Fish and Wildlife are trying to work with manufacturers and sellers to develop streamlined processes around this.
​
Each country has its own CITES Management Authority. If you live outside the United States, you can look up the CITES contact in your country here.

CITES is an international agreement that has been in effect since 1975. Its goal is to ensure that international trade of wildlife does not threaten the survival of species or the health of ecosystems. Nations participate in and adhere to CITES regulations voluntarily, but it is legally binding for those opting in.
According to the UN Office on Drugs and Crime, rosewood accounted for the highest percentage of illicit wildlife seizures by value from 2005 to 2014.
The reason for the billion-dollar demand for rosewood - and the subsequent trafficking - has less to do with musical instruments and much more to do with furniture.
In particular, China’s high-end furniture market created enormous demand that led to severe deforestation of several Dalbergia species in Thailand, Vietnam, and several other countries.
Not all Dalbergia species are threatened by the furniture boom. But rather than train border officials across the world how to identify the nuanced differences between them - something that even experts struggle with at times - the participants of the CITES conference decided to create a blanket regulation on the entire genus of Dalbergia wood.

The number of musical instruments containing some amount of rosewood, cocobolo, bubinga or kosso that cross international borders each day is staggering.
To put it mildly, the new regulation creates a lot of new work on very short notice for government agencies around certificate approval and issuance.
Instruments sold to buyers outside your country will be subject to CITES enforcement by the receiving countries. The consistency and vigilance in checking for documentation is something that remains to be seen.
As this is a developing story with emerging details from CITES and US Fish and Wildlife, please stay tuned for updates and new information.