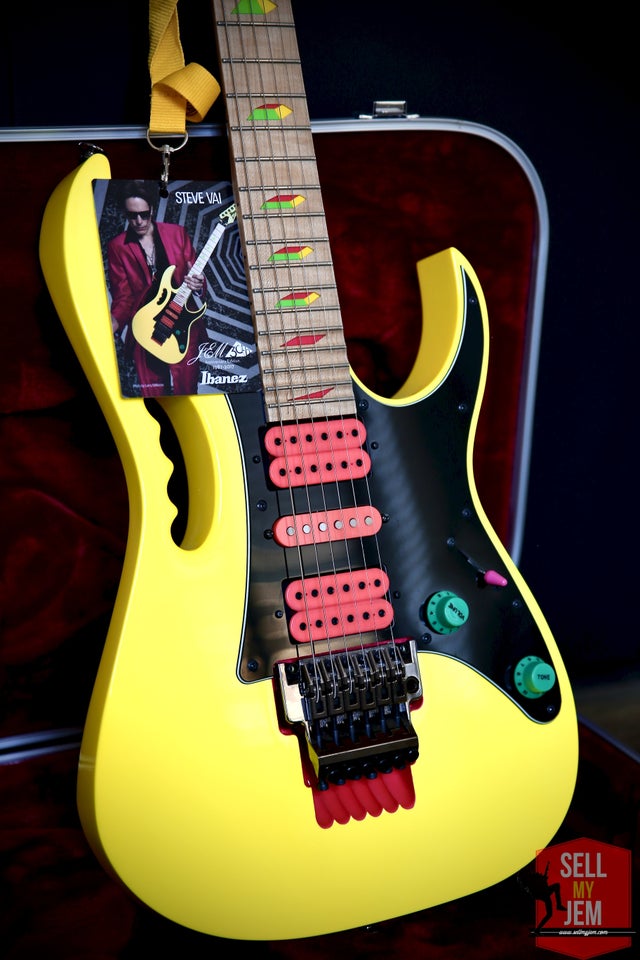 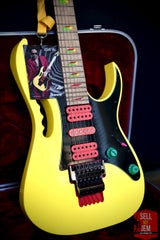 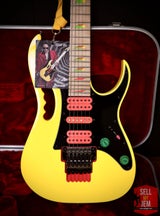 This guitar has now sold. If you don't want to miss out sign up to our mailing list and get notified before the guitar is listed publically! You can sign up on our About Us Page

Only 1 Available at this incredible price discounted due to some very minor notes in the condition report below. The best value 30th Anniversary available online anywhere in the world! As new, ready for a new owner, and pristine with Tags + all case candy!! 1 of only 250 worldwide*

The legend is back! The Ibanez JEM777 is the first JEM series of Steve Vai’s signature model. The 1987 Chicago NAMM Show marked the introduction of the Steve Vai-designed JEM guitars and constituted a major turning point in the fortunes of Ibanez and the development of the electric guitar. The JEM, with its cutting edge floating tremolo and monkey grip, took off like a rocket. Ibanez was finally viewed as an important innovator and there would be no looking back. 30 years later, the JEM has become an iconic image in the world of guitar and, for over a decade, its sister model, the RG, is second in worldwide sales only to the Fender Stratocaster. Ibanez is very pleased to celebrate this 30-year milestone in the ever-evolving and fruitful collaboration with Steve Vai.

The year 2017 marks the 30th anniversary of JEM series. Ibanez proudly revives the classic JEM777 with updated specs and celebrates its anniversary. As featured in the original JEM777, the body is solid basswood with a fat but well-balanced tonality, including the JEM’s symbolic feature: the “Monkey Grip” handle.

The slim JEM 5-piece maple/walnut neck is jointed with a metal plate including the 30th anniversary logo.

The neck joint is traditional, but the Tilt-Neck Joint offers easy upper fret access. The maple fretboard has a Scalloped Fingerboard on 21–24 frets, and the Disappearing Pyramid inlay is colored in green, yellow, and pink.

The DiMarzio® Evolution® pickups are the main factors in giving the JEM series its unique sound.

A 30th anniversary plate is attached inside of the hard-shell case. A green multi-tool mirroring the JEM777’s image colour, a certificate of authenticity, all original Tags and inspection cards along with an Ultra Light Tremolo arm. Everything included has been photographed in the 3rd image.

*It is believed that only 900 worldwide of these were produced; 450 green and 225 each of pink and yellow.

Guitar Summary
Stunning in every respect. The power of the yellow is enough to break lenses so be careful and wear shades when handling 😂. The Jem777 is a limited edition, one-off run of the incredible Steve Vai Jem signature model. Complete with the Monkey grip handle, DiMarzio evolution pickups and a semi-scalloped fretboard (only the 21st to 24th frets are scalloped).

Stunning Look
The first thing you'll notice is the bright neon finish that's as big and bold as Steve Vai's guitar playing! This limited colour looks like it's come straight out of the 80s but with all of the modern treatment that'll make this one rocking guitar.

A Little Bit Different
There are a few key tweaks that have been made to this guitar that make it a different beast than you may be used to out of the Steve Vai series. The maple fretboard on top of a 5 piece maple/walnut neck matches the American basswood body well to create an acoustic sound that is focused and bright. To make sure it doesn't get too bright when running through your amplifier this model has the DiMarzio Evolution in the neck and bridge position. These pickups are fierce and bright with loads of low-end punch to cover any style of music.
​
Hardware That Lasts
At no point in their range do Ibanez skimp out on the hardware. From the 6105 frets that have been finished with Ibanez's Prestige fret edge treatment that rounds the edges for smoother playing, to the Edge tremolo every part of this guitar has been meticulously chosen. This means that you can rely on this guitar night after night.

STEVE VAI, IBANEZ AND THE JEM

The 1987 Chicago NAMM Show marked the introduction of the Steve Vai-designed JEM guitars and constituted a major turning point in the fortunes of Ibanez and the development of the electric guitar. The JEM, with its cutting edge floating tremolo and monkey grip, took off like a rocket. Ibanez was finally viewed as an important innovator and there would be no looking back. 30 years later, the JEM has become an iconic image in the world of guitar and, for over a decade, its sister model, the RG, is second in worldwide sales only to the Fender Stratocaster. Ibanez is very pleased to celebrate this 30-year milestone in the ever-evolving and fruitful collaboration with Steve Vai.

This Guitars History
This was bought direct from the factory and has spent its entire life in the case awaiting someone to play it.  It looks to have been tested once with only a handful of pick lines on the pick guard to indicate very light testing. A virtually unplayed example in as new condition with all case candy, tags and tools that you would expect. There is not much to say about this guitar other than its the best value 777DY 30th anniversary available anywhere on the planet right now (As of February 2021)! It does have 1 very small note to point out. There is the smallest of hairline mark in on one side of the neck pocket. Quite normal for Ibanez jems with this style of neck joint but worth mentioning. It is only in the lacquer and less than half an inch in size in an inconspicuous location that you would not see unless you are looking for it. You are essentially getting a near unplayed example with all the playability and incredible sound of the original at a discount to the current market price of these limited edition models!

Condition: Fit and Finish
This guitar is sold as new New. Not a mark on it other than some very light pick superficial pick lines on the pick guard, all in original case from the factory in Japan, a stunning, incredible guitar ready for its first owner.

Fret Life/Fretboard - This guitar has had no use, almost no visible signs of playing, therefore Frets have maximum life left in them.
Tremolo - Completely new tremolo
Neck - Original Neck Straight as an arrow with an incredible feel and grain. No cracks or wood problems. The neck pocket on one side shows a hairline mark around half an inch, photoed in the most unflattering angle I could find. See image to see just how minor this is.
Electronics - As you would expect in a new instrument there are no issues with electronics. Sounds like a dream!
Body work- Perfect.
Case - This guitar comes with the a lovely new Hard Case in unused condition.

Unlike most sellers, all guitars bought at the asking price come with a full complimentary, professional set up. This is an extensive, time consuming process that I personally undertake. The procedure is laid out below but ensures that each instrument arrives to your door in exceptional condition and with a playability that only Jems can offer. You can be sure you are getting one of the best playing instruments around!


A total of 3-5hrs is spent as standard for a guitar this beautiful, its actually a pleasure to undertake!

I take shipping guitars of this beauty very seriously and make sure it is bomb proof and all international shipping quotes come with £1000 worth of insurance for damage in transit, there is also an option not to take insurance but I strongly advise against!

All guitars are wrapped to the highest standard, inside the case the guitar will be bubble wrapped and any accessories individually packaged inside the case. Nothing loose will be left in the case. The guitar is then wrapped a total of 3 times in bubble before a strong brown paper incases the the whole guitar. I have been shipping guitars all over the world for 10 years with no problems reported.

Please take a look at the sellmyjem Returns Policy for both international and domestic. Most Ibanez Jem sellers dont honor any returns at all but if you are not happy with your purchase then im happy to accept a return providing you conform to the returns policy of the website. ​
​