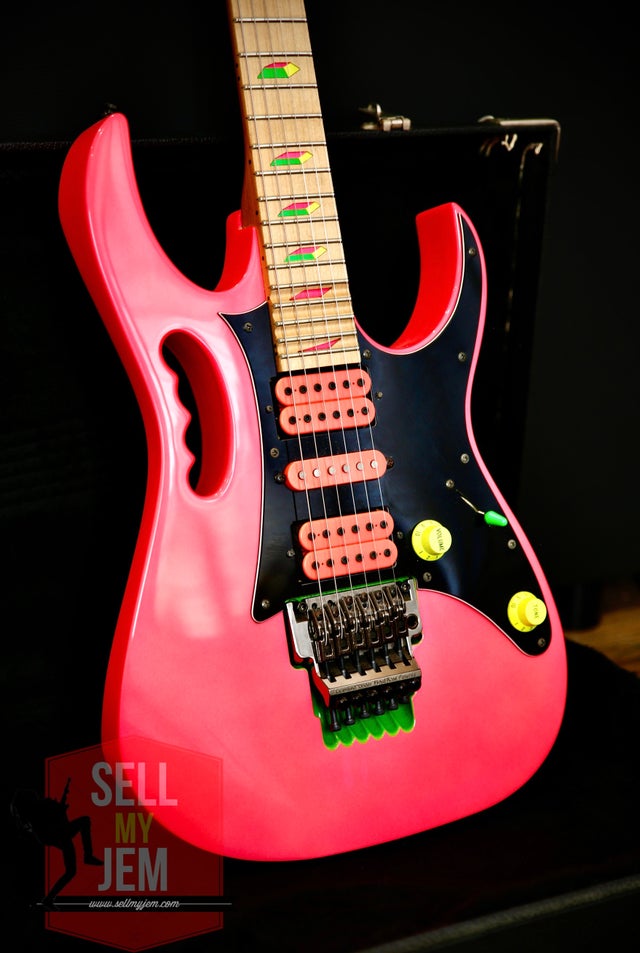 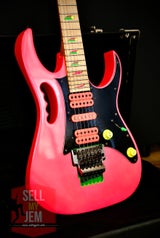 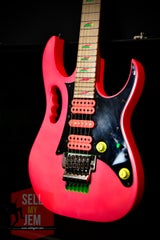 If you're reading this then unfortunately its too late! The guitar has sold! We will update this page if the situation changes. If you don't want to miss out then make sure you sign up to our Mailing List for the next one!

Calling all Ibanez Jem NUTS! At the time of writing, the only early edition 1988 777SK for sale in the world! One of our private stock. The stunning conditioned 1988 777SK Shocking Pink Ibanez Jem! This won't be around for long.

Privileged to offer a guitar steeped in history. An absolute icon. There is so much to say about this guitar, please check the guitar condition report below for full details on this incredible guitar. This is a guitar for the collectors of the very best jems. If your viewing this you probably already know how rare an SK in this condition really is and if you are looking for one to add to your collection this is the ideal! Get all the nostalgic vibes and history whilst being able to rock the hell out of it. This particular 777SK rocks where it matters.

Jem collectors will know exactly what this iconic neon is all about and this is one of those moments you may drool onto the keyboard (if your an SK shocking pink fan that is like us!) A lovely 1988 all original production model Shocking Pink 777SK Jem and its just been made available for sale, right here! This is one chance you don't want to miss.

When these came out in the 80’s the SK run was shorter than all of the other NEON guitars due to the notorious paint fade problems when exposed to sunlight. Some love it, some hate it, but either way it rarely matters when you start playing an SK! Direct sunlight fades these guitars which is why a good unfaded version is so rare. This guitar absolutely screams and is a homage to everything great about the old 777 jems. Purely ridiculous genius.

Jems, and particularly SK Prices have been going through the roof in the last few years and there are no longer many examples for sale anymore. People are starting to see what we always have and beginning to invest/collect and play them more. We have priced at the current market value based on our own sales data and online completed SOLD listings. With the most recent selling for £5045 (Link 2 months ago) in substantially poorer condition and without a case. We have therefore appraised this guitar at £5499 or equivalent in your currency. We expect this guitar to gather a lot of interest so please do not be disappointed if you make an offer and it was not successful. Asking price will guarantee you the guitar upon offer on a first come first serve basis.

1988 Production Model + Hard Case + Tremolo Arm
CONTACT
Interested In This Guitar? Get In Touch!
Guitar Overview!
I have been buying, selling and admiring Ibanez Jems for over 15 years and every now and again a guitar comes through that really knocks my socks off and this SK is one of them. Ive seen them beat to hell, faded to a Trumpian level of orange, battered and chipped but this one, wow!  Virtually perfect condition

​We don't see many SK's for sale anymore and the pandemic has acted as a catalyst for the original Jems. With many seeing the value of these reaching Early Gibson levels of admiration and collectability. This is a chance to get a 777SK for those that are looking for pristine exampled of one of the most iconic guitars in Jem history. The guitar has been used but lightly and clearly by very careful owners, predominately collectors, this is going to make a worthy, enviable edition to any jem collection. Due to the rare nature of the guitar we are not including setups as standard and so I would advise if this is to be played rather than for collection to have a basic set up on receipt to include a small adjusting of the intonation as over the decades it could do with a slight tweak after we have checked over the guitar. Thats just the OCD side of us getting through, the guitar is more than capable right out of the box but as it is sold as seen, a set up would be advisable upon receipt of the guitar.

This guitar absolutely screams and is a homage to everything great about the old 777 jems. Purely ridiculous genius. If you EVER wanted an SK and you want feel what its like to play the golden era of jems. This is the one for you!

If you would like to make an offer, use the buttons above. The opportunity to own one in this condition wont come around again soon! Its a once in a decade event here at SellMyJem!

Condition: Fit and Finish
Fret Life/Fretboard - Huge amount of fret-life and playability in this guitar. Close up pictures are there for you to confirm. My OCD would adjust the neck to ensure there are 0 fret buzzes. As mentioned It would be our advice to get this professionally set up on receipt but there is no fretwork required. Id rate these at around 98% of their original fret life remaining.
Fade - There is NO fading on the body that I can see on the naked eye and under different lighting conditions. If there is it is almost completely uniform. This has clearly been stored in its case over the 30 years and a rare example of a bright, vibrant SK.
Tremolo - Tremolo hardware is in very good condition with little tarnishing. This model has the Edge Tremolo indicative of models from the 1987-89 and is considered the greatest tremolo of them all and only available on the early models of the 777 before they moved to a Low-Pro
Neck - A lovely feel and grain to this neck, no nicks, bumps or grooves. There are no hairline stress marks on the back of the nut. Close up picture has been taken for reference. The neck pocket has would normally have the usual hairlines on either side. However, shockingly (pink) there are NO neck pocket cracks on this guitar AT ALL!
Electronics - The electronics scream! The original PAF pro pick ups are still in place and sound absolutely incredible!
Body Paint - I almost can't believe I'm typing this but, No Nicks/Bumps/Scratches/Dents/Chips.....on a guitar that's over 30 years old that's almost unheard of, but for this SK its true! No noticeable fade, incredible!
Case - This is the original hard case shipped with the guitar. Despite popular believe not all of the early editions (Other than the LNG) came in the pink lined case. Most were more generic cases such as this. Used and period correct from the original owner in 1988  and was bought with the guitar at the local guitar dealers, but is not the pink lined M1000C hard case. Case shows little signs of use and fully functional.

I take shipping guitars very seriously and make sure it is bomb proof and all international shipping quotes come with £1000 (increasable on demand and highly advised!) worth of insurance for damage in transit. All are tracked and you will be issued a tracking number as soon as payment has been received and delivery arranged.

All guitars are wrapped to the highest standard, inside the case the guitar will be bubble wrapped and any accessories individually packaged inside the case. Nothing loose will be left in the case. The guitar is then wrapped a total of 3 times in bubble wrap before a strong brown paper incases the the whole guitar.
​
Returns