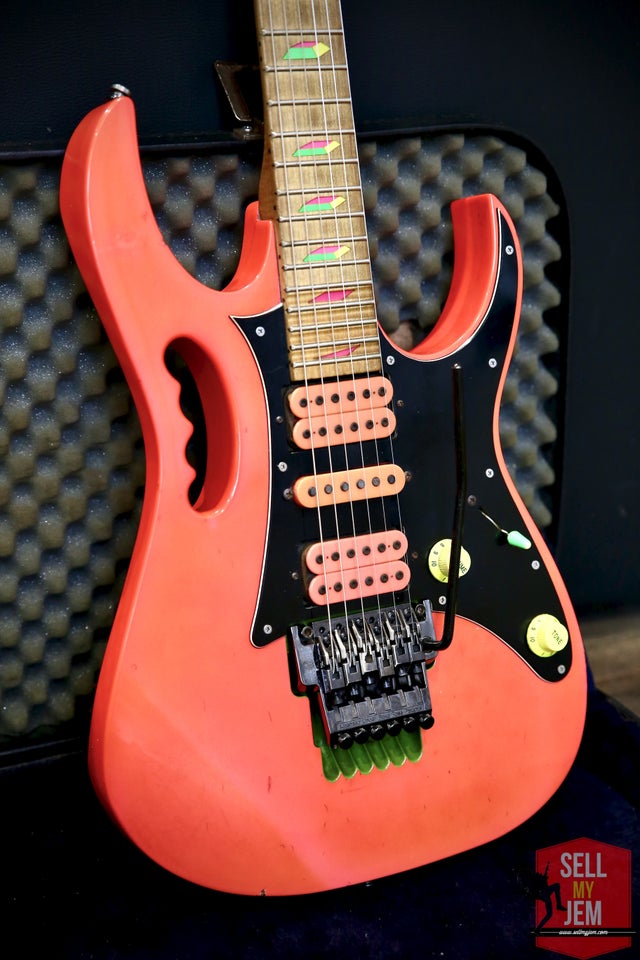 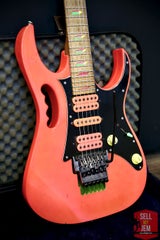 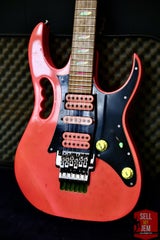 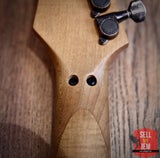 Privileged to offer a guitar steeped in history. An absolute icon. There is so much to say about this guitar, please check the guitar condition report below for full details. This is a guitar for the players, those that love, cherish and wish to play these exceptional guitars from the golden era of Jem Manufacturing without fear of it showing. Get all the nostalgic vibes and history whilst being able to rock the hell out of it. This particular 777SK rocks where it matters, playability.

Prepare yourself for some Guitar Acquisition Syndrome! (GAS) Jem collectors will know exactly what this iconic neon is all about and this is one of those moments you may drool onto the keyboard (if your an SK shocking pink fan that is like us!) A lovely 1989 production model Shocking Pink 777SK Jem and its just been made available for sale, right here! This is one chance you don't want to miss.

When these came out in the 80’s the SK run was shorter than all of the other NEON guitars due to the notorious paint fade problems when exposed to sunlight. Some love it, some hate it, but either way it rarely matters when you start playing an SK! This guitar absolutely screams and is a homage to everything great about the old 777 jems. Purely ridiculous genius. If you have been looking for an SK you can play without worrying about a tiny nick then this is an ideal guitar for you.

SK Prices have been going through the roof in the last few years and there are no longer many examples for sale anymore. We have priced under market value to reflect the condition of the instrument. If you're looking at this, you know what you're looking. This has been priced competitively relative to the current market to reflect the condition of the guitar and the collectable nature of it.
Buy Now

1989 Production Model + Hard Case + Tremolo Arm
CONTACT
Interested In This Guitar? Get In Touch!
Guitar Overview!
This guitar has HISTORY all over it, quite literally this guitar has been places, seen things and had a life of a rockstar and its a fantastic thing to see as much as we love mint examples, when it comes to player guitars this one really has an aura about it from the moment the case opens.

​We don't see many SK's for sale anymore, let alone any at a reasonable price for the people that want to enjoy their jems, play them, love them, rock out on them! This is a chance to get a 777SK for those that choose to rock on their Jems. The guitar has been used and clearly seen some live shows, its got a lot of character and for the right buyer this is going to make a worthy, enviable edition to any jem collection. If you have wanted a Jem you can actually play this is the one for you as it rocks in all the places where it matters. I would advise this have a basic set up on receipt including some fret work on the edges to realise the maximum playable potential of this guitar. Thats just the OCD side of us getting through, the guitar is more than capable right out of the box but as it is sold as seen, a set up would be advisable upon receipt of the guitar.

This guitar absolutely screams and is a homage to everything great about the old 777 jems. Purely ridiculous genius. If you EVER wanted an SK and you want feel what its like to play the golden era of jems. This is the one for you!

If you would like to make an offer, use the buttons above. The opportunity to own one in this condition wont come around again soon!

Condition: Fit and Finish
Fret Life/Fretboard - Huge amount of fret-life and playability in this guitar. Close up pictures are there for you to confirm. However, and this is being quite OCD, I would highly recommend this has some fret work done. The edges of the frets over time expand, contract within the neck and on playing the frets are a little bit too prominent for my liking on the edge. Nothing a quick file can't fix. It would be our advice to get this professionally set up on receipt with some fret work to get the maximum potential out of this guitar.
Fade - There is some fading on the body indicative of a guitar with use. An ever so slight organising over time is expected of the SK's and this one is no different, aged like a fine wine the colour is totally unique to this particular guitar. Fairly uniform across the whole body with a slight difference between the headstock and body
Tremolo - Tremolo his in very good condition with little tarnishing. This model has the Low-Pro Edge Tremolo indicative of models from 1991 onwards and was likely an upgrade to the original or installed at the factory prior to sale of old stock, still period correct to the early models as the tremolo of choice from 1991 on.
Neck - A lovely feel and grain to this neck, no nicks, bumps or grooves. On very close inspection we notice a small hairline stress mark on the back of the nut but this is not structural and of all stress lines we have seen one of the smallest and lightest grade there is. This will have no impact on the playability or integrity of the guitar and has been thoroughly checked over for movement, of which, there is none. Close up picture has been taken for reference. The neck pocket has the usual hairlines on either side. To be expected of these and a common issue that can be easily glued if there is any concern of movement. We have test the neck and observed 0 movement and wouldn't advise any further action required.
Electronics - The electronics scream! The original PAF pro pick ups are still in place and sound absolutely incredible!
Body Paint - As this guitar has a bunch of character to it, there are the expected marks you would have on a well loved and played guitar. The most noticeable have been photographed and full front/side/profile shots will give you a good sense of its condition throughout
Please take a look at the Store Website for more high quality images from all angles!

Case - Used and period correct from the original owner in 1989  and was bought with the guitar at the local guitar dealers, looks like a custom job, but is not the pink lined M1000C hard case. Case shows signs of ageing but in relatively good condition and functions well

I take shipping guitars very seriously and make sure it is bomb proof and all international shipping quotes come with £1000 worth of insurance for damage in transit. All are tracked and you will be issued a tracking number as soon as payment has been received and delivery arranged

All guitars are wrapped to the highest standard, inside the case the guitar will be bubble wrapped and any accessories individually packaged inside the case. Nothing loose will be left in the case. The guitar is then wrapped a total of 3 times in bubble wrap before a strong brown paper incases the the whole guitar.
Returns